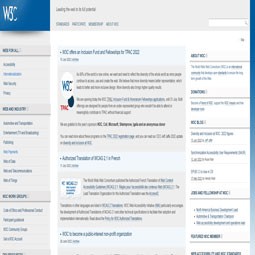 The World Wide Web Consortium (W3C) was founded in 1994 by Tim Berners-Lee after he left the European Organization for Nuclear Research (CERN) in October, 1994. It was founded at the Massachusetts Institute of Technology Laboratory for Computer Science (MIT/LCS) with support from the European Commission, the Defense Advanced Research Projects Agency (DARPA), which had pioneered the ARPANET, one of the predecessors to the Internet.

The organization tries to foster compatibility and agreement among industry members in the adoption of new standards defined by the W3C. Incompatible versions of HTML are offered by different vendors, causing inconsistency in how web pages are displayed. The consortium tries to get all those vendors to implement a set of core principles and components that are chosen by the consortium.